We’ve all seen the slogan: ‘Dig For Victory!’, but how easy was it for people to be veggie during the war?

This month marks the 75th anniversary of VE Day. On the 8th of May VE Day, which is also known as Victory in Europe Day, is one of the most important celebrations in British history. This special day marks the end of World War II, when fighting against the Nazis finally came to an end in Europe. The holiday fell on a Bank Holiday weekend this year in the UK, resulting in a three-day weekend of commemorative events. As people all over Europe have been reflecting on life during the war, we take a closer look at what it might have been like as a vegetarian!

With veggie-options everywhere you go, it’s no lie that we take full advantage of the options we have in today’s world. There are vegetarian sections in our supermarkets, restaurants and bars almost always have veggie options now, and sometimes even their own complete vegan and veggie menus. Rewind 75 years, and it was a completely different ballgame.

For soldiers, being a vegetarian was certainly hard. Rations consisted of a chicken, tuna, ham or spam option in 1944, very little veggie options there. Unless of course, you had cake. Cake was part of the emergency ration kit, that included sugar and tea, and was designed as a high-energy supplement to keep you on your feet. This sweet option did help the soldiers who considered themselves vegetarian.

The problem with vegetarian life in the army, particularly a mobile war like WW2, is storage. Tinned meats were easier to store and transport, while vegetables could go bad well before they were needed. And it wasn’t as if the soldiers had time to tend allotments out on the front lines!

At home things were a little easier. Our name sake foodstuffs, vegetables, were never rationed and as the war progressed, people were encouraged to ‘Dig for Victory’. However, by 1940, rationing was in full effect, leaving veggies without easy access to supplements like cheese and cereals to maintain a healthy diet.

In October 1939, the British government officially launched the “Dig for Victory” campaign. This was launched with the aim of encouraging UK civilians to grow their own vegetables during WW2, and was hugely successful. Among the varieties of veggies that people were encouraged to grow, the most popular were potatoes, peas, carrots, parsnips, onions, shallots (known to be the finest thing for a real pickled onion), marrows and celery.

Dig for Victory was phrased as “It’s not the green grocer’s fault, it’s up to you!” A 10rod plot was known to keep a family of five with enough vegetables for eight months of the year. Young women and children were encouraged to work on vegetable plots in their spare time, it even became part of the school routine. In the commercial that aired, it was quoted that “food is just as important weapon as guns.” It was advertised that you would help the country win the war, by helping yourselves to good food. This was in the argument that if you were strong and healthy, you would be helping the country.

Civilians were encouraged to grow vegetables wherever they could. As not everyone had the space for a plot, if they could find a small area where they would grow their own, they were advised to. Digging was positioned to be good fun, and the exciting times would begin when the first seedlings appeared, as this meant you could see what you had grown and provided for your family. 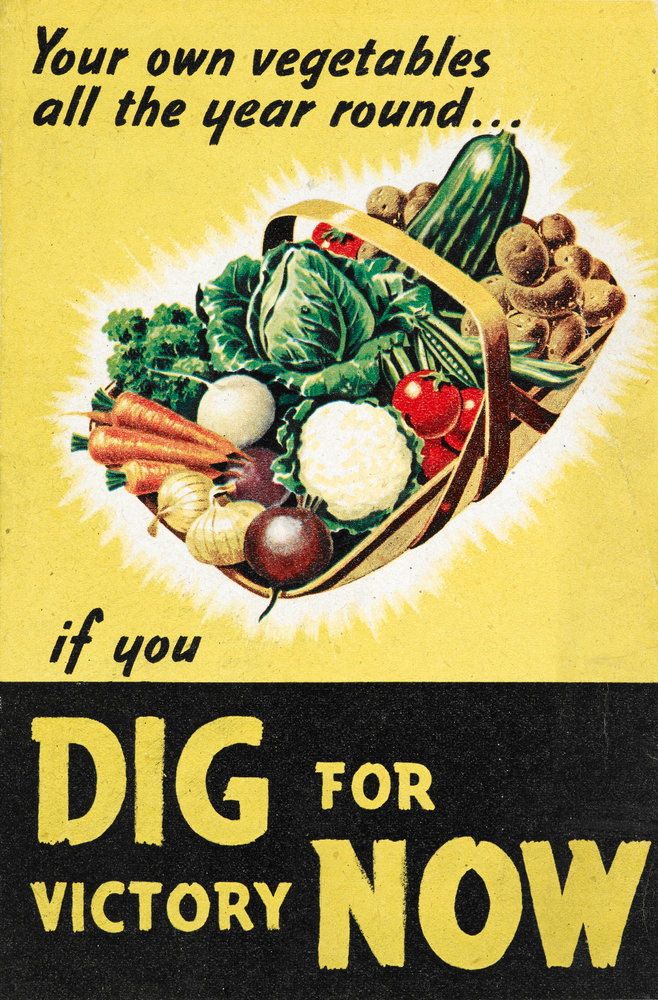 The Vegetarian Society had begun to lobby the government for support and recognition from as early as 1937. When rationing was introduced, vegetarian societies entered negotiations for fairer rationing options in exchange for their meat rations. By 1942, they had secured more eggs, cheese and nuts for registered vegetarians.

Around 50,000 people across the UK registered as vegetarian during the war, though this number is known to have included sneaky families who claimed to have a veggie in the family to get more cheese.

After the war, rations and homegrown vegetables were widely considered to be the ideal lifestyle, full of great healthy eating. Lots of veg, delicious brown bread, low meat and sugar, what’s not to love? Learn more about the importance of vegetables throughout history, with our blog  ‘Why did sailors get scurvy?‘