V8 juice has been around for almost a century and is still enjoyed by people of all ages all over the world. Read on to learn about the origins of this juice, and about the events that have helped to shape the company over the years.

The first recipe for V8 Juice was created in 1933 by Chicago-based Frank Constable. He was contracted by W.G. Peacock, who was the founder of what was then known as the New England Products Company. The V8 Juice was manufactured under the brand name of Vege-min, and at the time, tomato juice made up 87% of the recipe.

Throughout the 1940s, V8 partnered up with a number of different Hollywood personalities in their advertisements, including:

These familiar faces made V8 juice even more popular among the masses, particularly in the US.

Rations came into effect in 1940 during World War II, and included things like meat, eggs, cheese, and sugar in the UK, and butter, milk, and sugar in the US. The British nation was encouraged to ‘Dig for Victory’, by planting their own vegetable gardens at home. The idea behind this was to make sure all families had access to nutrition, which is why V8 juice was also popularised. See below a young boy buys a can of V8 juice, while also shopping for rations. 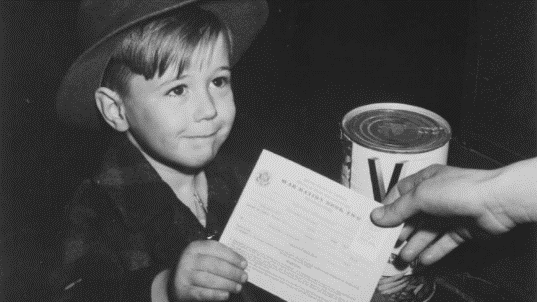 Constable continued to tinker with the recipe over the years, combining the different juices of various vegetables. In 1947, the recipe using eight vegetables that we enjoy today was settled on. It was rebranded Vege-min 8, and then V8 Vegetable Cocktail Juice. Constable declared that the juice was named after the V8 engine, which was the most powerful at the time. There is a grocery store in Evanston, Chicago, however, that claims that they came up with the name.

1948 was an important year for V8 juice, as the founder of the company passed away. V8 juice was then bought by the Campbell Soup Company – a deal which included a manufacturing plant in Napoleon, Ohio, which is still used today.

A few years later, in 1951, actor and future US president Ronald Reagan became the spokesperson for V8 Juice. He appeared in a number of advertisements, including this comic-strip style advert in 1952.

Pop Art fun car creator George Barris built the V8-Roadster, featuring the well-known branding styles and images of V8 juice. Barris was well-known in his day for building custom cars especially for TV and film. He also created the ‘Batmobile’ for the 1960s Batman television programme, and the ‘Jalopy’ in The Beverly Hillbillies.

Among the eight vegetables found in V8 Juice is celery, which has been supplied to the company by the same farm in Michigan since the 1940s. The Willbrandt family farm was first built in the 1880s in Muskegon, Michigan by the current owner’s great-great-grandfather. It later moved to Decatur, Michigan, and the family began selling celery to the New England Product’s Company, for V8 Juice, in the 1940s. They continued supplying celery after V8 was bought by Campbells, and owner Jake Willbrandt’s grandfather and great-grandfather both worked for Campbell’s as buyers.

V8 introduced new V-Fusion and energy drinks to the market, which were designed to provide consumers with more healthy beverage options. The V-Fusion drinks combined half a serving of vegetables with half a serving of fruits, including sweet potatoes, apples, white grapes, and purple carrots. The energy drinks contained 80mg of caffeine, no added sugar, and only 50 calories.

Today, V8 continue to be focussed on helping people lead healthier lifestyles by making it easier for them to consume vegetables. One glass of V8 juice contains one of your five a day, so incorporating it into your daily routine will help you on your way to better nutrition. Find out more about whether V8 juice is good for you.

V8 juice has been a household staple since it first started appearing on shelves in the 1930s. Whether enjoyed for its nutrition or for its sweet and savoury taste, V8 is well-loved by people of all ages and all walks of life. As well as consuming it by the glass, consider using V8 juice in other recipes, from pasta dishes to salads and stews. Check out our recipe section for some inspiration.

What Vegetables Should You Plant in May?